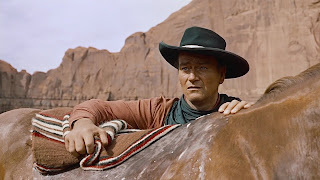 Martin Scorsese, Bruce Springsteen, Clint Eastwood and the American Film Institute can't all be wrong, can they? That was my thinking when I decided to watch the John Wayne western The Searchers, named the number one western by the American Film Institute and praised by the above among others. (Check out the AFI's Top Ten Westerns here.) Also in its favor: the director is John Ford, director of The Grapes of Wrath, which impressed me in spite of occasional heavy-handedness and Henry Fonda looking more like a model for a toothpaste ad than a weathered and impoverished fruit picker.

The Searchers tells the story of a former confederate soldier who spends years tracking down his niece, who was kidnapped by Comanche Indians, the latter of whom the veteran seems to hate more than he loves his niece. The movie is beautifully filmed--much of it near the Utah-Arizona border--and it has several memorable moments. I've seen more John Wayne parodies than actual John Wayne footage, and there were scenes in which he moved me, one in particular in which his eyes widened in a manner that suggested innocence and vulnerability as well as horror. But I wasn't as taken with it as I expected, although I'm usually able to appreciate older movies--melodrama and all. Granted, I'm new to westerns. Someone has since suggested I might prefer Red River or High Noon, also on the American Film Institute Top Ten Westerns.

That said, I've created a western DVD list for those who enjoy or want to explore the genre. It includes the AFI Top Ten Westerns and others recommended by western fans, including one of our regular patrons. All of the DVDs on the list are owned by our library. (We even have a special section just for western DVDs. There's also a section for western fiction. Both are on the third floor.)

Do you have a favorite western? What are your thoughts on The Searchers?
Posted by Laura Adler at 8:00 AM

I guess it's no surprise, given my weird sense of humor, but my favorite western is "Blazing Saddles." Crazy spoof, great cast, and Mel Brooks!

The Searchers may very well be "the best", whatever that really means. Yeah, I like it but I also place High Noon and Little Big Horn equally among my favorite memorable oaters.

Please leave your comments and suggestions here. Thanks!